Stations of his Life

Aron Tänzer was born on January 30, 1871 in Hungarian Preßburg. His father was a Rabbi and his mother worked as a midwife for the Jewish Community in Pressburg.

In his hometown Aron Tänzer attended elementary and middle schools, and after 1885 he attended a theological university for rabbis.

Even as a child he seemed to establish the reputation of being a child prodigy, or "Wunderkind." Aron Tänzer stood out among his fellow schoolmates due to his intelligence and grand rhetorical prowess.

In the 19th Century the city of Preßburg was a center of Jewish culture in the east and a stronghold for the research and teaching of Jewish Theology. The intellectual and cultural climate in the city, different religious and ethnic backgrounds, as well as intense experiences of the orthodox Jewish community heavily influenced the young Aron Tänzer. It was through these life experiences that Aron Tänzer’s never compromising optimism and humanism took root.

At the age of 21 Aron Tänzer enrolled at die Königliche Friederich-Wilhelm-Universität in Berlin. He studied Philosophy, Germanistik and Semitic Philology. As many of his brothers in faith, he too committed himself to a comprehensive Jewish-occidental education.

In 1894 he transferred to die Universität Bern to undertake studies leading to a Ph.D. The doctoral thesis concerned itself with systematic philosophical aspects of religion.

In the summer of 1895 Aron Tänzer passed his exams with a good score.

The search for a permanent position…

With the doctorate examinations behind him, Dr. Aron Tänzer pursued employment as a Rabbi. On August 20, 1895 he obtained the diploma necessary to function as a Rabbi from the Obornik community, located in the then Prussian province of Posen.

Next, the search for work led him to the city of Fogaras in Siebenbürgen. In 1896 he stopped in Hungarian Totis where he married Eleanore Rosa Handler on June 2. Under his father-in-law, Rabbi Mark Handler, he found a position as assistant rabbi.

In October of the same year, Tänzer lived in Buchach, Galician. Here he obtained a "right of residence," with which also was granted Austrian citizenship. This happened of course while considering a Rabbi position in Hohenems.

The "Homeland Certificate" (Heimatschein) granting Dr. Tänzer the right to reside in Buchach, issued by the township Buchach on October 15, 1896.

Rabbi for Tyrol and Vorarlberg

In October 1896 Aron Tänzer applied successfully for a Rabbi position in the Austrian city of Hohenems, Bregenz. Belonging to the Israelite cultural community of Hohenems were also those Jews living in Vorarlberg and Tyrol. At the time Tänzer assumed the position in Hohenems, there were only 100 Jews. As the trend of migration into the cities was to be observed everywhere at this time, this phenomena also took its toll upon the population of the Israelite community in Hohenems. The community founded in 1617 was now losing many members.

In 1905 Tänzer left his position at Hohenems. He responded to an invitation from Meran, where he took over a position as district Rabbi. Due to the authorization of the separation of the Jews in Tyrol from the Jewish community in Hohenems, a heavy dispute was started.

At the end of the dispute the unlawfulness of this act was confirmed. After the Rabbi position in Hohenems was filled, the position Tänzer held in Meran was no longer available.

Due to his misfortunate proposition in Meran, Tänzer searched a change in careers. He applied for the Rabbi position in Göppingen that had been advertised and was offered the position on September 1, 1907. Upon acceptance of the position, Tänzer was also legally entitled to the "right of residence" in Baden-Württemberg.

Rabbi Tänzer upon assumption of office in Göppingen in 1907.

Aron Tänzer and his family moved into the house next door to the synagogue.

The Göppingen Synagogue was officially opened in 1881.

The Israelite church congregation had acquired this building shortly before Tänzer’s arrival in order to furnish apartments for the new rabbi and family. In the house a community administrative office would also be created. 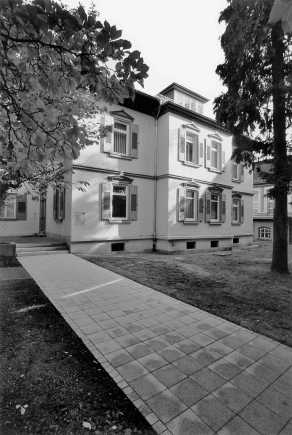 The Rabbi’s residence in Göppingen on the Freihofstraße.

Tänzer’s wife Eleanore Rosa died in 1912. A year later he married for the second time.

Marriage announcement in the Göppingen Newspaper from August 19,1913.

In Göppingen Aron Tänzer not only utilized his energies in service to the Jewish community but also used them beyond confessional borders, for cultural and social goals.

Founder of the Göppingen City Library

Influenced by the people’s education movement of 1900, a committee, "Committee Against Smut/Rubbish Literature," was formed. The mastermind behind this initiative was Dr. Aron Tänzer, his goal being the setup of public lending library for the city of Göppingen.

With a lecture about "Public education and the poisoning of the people" ("Volksbildung und Volksvergiftung") in 1910 Dr. Tänzer carried the idea of a public lending library into the public eye. At the end of the lecture he was able to collect money and book donations.

Announcement in the Göppinger Tageszeitung Hohenstaufen (daily newspaper) asking about book donations for the lending library, published on Nov. 29, 1913.

In his apartment Dr. Tänzer organized and cataloged the books.

The office of Dr. Aron Tänzer in the rabbi’s house at Freihofstraße 11, photographed ca. 1937. On the bookshelf stands the bust of Moritz Lazarus (1824-1909), his highly admired teacher, whose legacy was passed to him for further care.

In July 1911 he gave the city a library with 1000 volumes. Because there was a storage problem, the library was first opened a year later. Dr. Tänzer oversaw the new city institution on an honorary basis for twenty years.

In 1984, the year commemorating the 75th anniversary of the Göppingen Library, the city government of Göppingen decided to mount a plaque in lasting remembrance of Tänzer’s services to the city library.

Being the expert on German literature and German intellectual history, Dr. Aron Tänzer spoke over Goethe’s "Faust," Nietzsche’s "Also sprach Zarathustra," and Madach’s "Die Tragödie des Menschen." This series of lectures lasted over a period of ten evenings and had a direct resonating effect. Sometimes those attending the lecture numbered over 150.

The Göppingen Society for the Arts and Sciences experienced a change in 1928, evaluating its perspectives on education. The education of workers and the concept of a worker’s society with the goal of active participation of the public became a top priority. With this new concept, Dr. Tänzer abandoned his elitist education ideals and university-like lecture style.

Dr. Tänzer’s interests concerned primarily the history of the Jews. He wrote books about the places where he had been employed as a rabbi. As a scientist he continued much in the legacy of his teacher, the psychologist Moritz Lazarus (1824-1909), with particularly Jewish characteristics and ways of thinking.

Dr. Tänzer was employed by various domestic and foreign newspapers: he regularly wrote for The Israelite Family’s Newspaper and The General Newspaper of Judaism. From 1910 until 1914 he was the publisher of The Straßburg Israelite Weekly

Had Tänzer fulfilled the dreams of his youth, then he would have become an actor. To his life-long love of the theatre he remained true, even writing three pieces for the stage. A fourth work, "The Tragedy of the Jews," remained unfinished.

"A man of peace in the garment of war "

Soon after the outbreak of WWI, Dr. Aron Tänzer reported himself on September 1, 1914 voluntarily for military service as a rabbi in the army. Due to organizational reasons, his solicitation could not be coordinated to aid in the military’s concern for the soul. Then, in April 1915 he was allowed to march out and serve as a German patriot on the "homeland front." Every day he held a church service with prayers concerning the war in German and Hebrew, organized collections among Jewish and Christian citizens and gave lessons as a substitute teacher at a secondary school for girls.

Three years, until November 19, 1918, Dr. Tänzer served as army rabbi on the eastern front. Most of the time he was stationed in Brest-Litovsk and Pinsk. "A man of peace in the garment of war," as he once described himself, he looked after the soul concerns of the soldiers, helped in mobile army surgical hospitals and set up kitchens for the suffering population.

As "field rabbi," Dr. Tänzer set up kitchens for the suffering population.

For his service in the front, Dr. Aron Tänzer was honored and decorated with medals.

Dr. Tänzer died on February 26, 1937. No kind of notice of his death was posted; no obituary was published in the newspapers.

Around a year before he passed away Dr. Tänzer wrote his will in which he made known the process of his wished burial. He wanted to be buried by a work colleague. According to his wishes, no type of memorial speech or anything of the like was to be held… also no kind of German prayer.

Under point 10 of his will he recorded the inscription, which was to be engraved into his headstone:

"My headstone should say: Dr. Phil. Aron Tänzer, Rabbi in Hohenems, field rabbi in the World War from 1914-1918, knight of high decoration, author of scientific texts, born January 30, 1871, died… then leave room for the inscription of my second wife.

The Tänzer family grave on the Israelite part of the Göppingen cemetery. The inscription constituted by Dr. Tänzer, left in remembrance of his accomplishments and merits, was gladly made forgotten by the Nazis.

The fate of the widow Berta Tänzer and her children

Dr. Tänzer left behind a wife and six children.

The widow of Tänzer moved into the former provincial sanctuary "Wilhelmsruhe" in Sontheim bei Heilbronn. During the time of National Socialism older Jews from southwestern Germany found accommodations here. From Sontheim the widow moved to Haigerloch on March 23, 1942. A little while later she was deported to the concentration camp KZ Theresienstadt. It is there on September 25, 1943 that she died.

The Jewish home for the elderly in Sontheim.

The already grown children lived at the time of death of their father no longer in their parent’s home. Fritz was a merchant in Tel Aviv, Irene lived in Budapest, Hugo worked as a merchant Vienna, Ilse lived in London. Paul was a lawyer in Stuttgart und Erwin still studied in Berlin.